I found myself in a certain room and out of nowhere, I looked out through the window to catch a glimpse of the blue sky which I knew was going to pass by, it being winter. I am obsessed with the colour blue and blue skies are not an exception. However, one thing captured my eye at this particular instance. The sky was indeed beautiful, but there was this other thing-the moon. It wasn’t a full moon and definitely not the clearest moon I have seen. Nonetheless, on this particular day, something struck me which has never crossed my mind before. The first thought that came to mind were the words of Neil Armstrong who said, “It suddenly struck me that that tiny pea, pretty and blue, was the Earth. I put up my thumb and shut one eye, and my thumb blotted out the planet Earth. I didn’t feel like a giant. I felt very, very small.” I guess I was having a similar experience to his except that I wasn’t on Apollo 11 as he was. Maybe it might have been a reverse experience of what he saw since he was on the moon looking down to the Earth and here I was on Earth looking up to the moon. Regardless of the confusion in my head, I was tempted to put up my thumb and close one eye, sadly I didn’t. Nevertheless, I was convinced that if I did, my thumb could have blotted out the moon.

The most important thing is not that my thumb can blot out the Earth or the moon, rather, it is trying to getting an idea of how small we really are. I know you love numbers (haha) so they might help us here. On average, the moon is about 384, 400 km from the Earth, which is a long distance to start with. Our nearest star, the sun is about 149 600 000 km away from us and the Earth pales in comparison to size of the sun. It is so large that about 1, 300, 000 planet Earths could fit inside it. It is said that the human mind/imagination can only picture objects between 6 and 9 in number. So if an average person hears 10 apples for example, that quantity is hard to imagine in the brain. The same goes for magnitude. Which is why I won’t be surprised if you skipped those numbers above without even reading them, cause the brain can’t fathom how big they are. Having said that, it follows that it is virtually impossible for the human mind to picture how far the moon is or how big the sun is without the aid of a picture. So to give a perspective of how small the earth is, here is one picture. 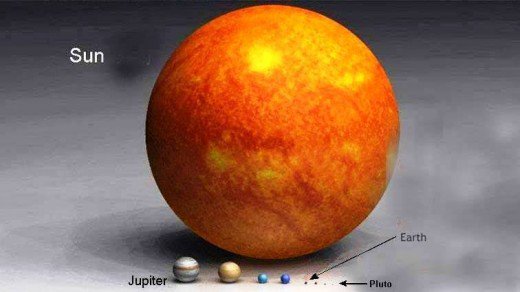 Now I know, that when you looked at the picture, you could not locate yourself on the picture of Earth (if you did, contact me, we need to talk!), not even the continent where you from. In fact, it might have been even hard to see the planet Earth itself. Carl Sagan described the Earth rightly as “…a mote of dust, suspended in a sunbeam.” The sun isn’t even the biggest star out there. There are brighter, bigger stars out that I won’t go into trying to compare to the size of the Earth because the point is clear, we are really really small in the universe.Sometimes, this is not a good feeling to get, but I echo the words of Louie Giglio; “am not trying to make you feel small, am trying to help you see that you are small…” Lucky us, the story does not end here. Read on!

The universe is fascinating to look at. The stars are beautiful to gaze at when they come forth in their splendor and the sky is clear. Am sure everyone loves the night sky with all the peace it brings.

There is a reality more fascinating than this and that is that the God who created these stars is even more glorious. For he spoke and it became to be and “by the word of the LORD the heavens were made, their starry host by the breath of his mouth”-Psalm 33:6. The galaxies, as big as they are, the stars as bright as they are were all created by God for his own glory. Now think about it. If God created the stars as beautifully as we see them (You have to trust me on this one, stars are very beautiful. Just look at the picture below) and everything else that we see (and not see), why then did he choose to come to Earth. Why did he choose to come to that mote of dust? Even David, thousands of years ago asked the same question. “When I consider your heavens, the work of your fingers, the moon and the stars, which you have set in place, what is mankind that you are mindful of them, human beings that you care for them?”-Psalm 8:3-5.

This might seem ironic indeed but not when you look deep into the Christian belief and find that it is at the basis of the Christian hope. It is that God is the one who comes down to save his people instead of us finding our way to him. For “…while we were still sinners, Christ died for us.“-Romans 5:8. People argue that religions are the same in the sense that they are all man’s effort to find his way to a ‘supreme being’. However, I beg to differ and conquer with Ravi Zacharias who said “My premise is that the popular aphorism that ‘all religions are fundamentally the same and only superficially different’ simply is not true. It is more correct to say that all religions are, at best, superficially similar but fundamentally different.” There is no other religion were we find this kind of order, of God coming down to save his people before the people themselves make any effort to save themselves. My argument here is not that Christianity is the only true religion (I would love to talk about that later), but it is that at its core, its very different from other religions. Because from the very start, its not people running after God, instead, it’s God coming down for his people.

So I sat there, with all these thoughts flooding my mind and leaving me in awe. At the end, I was left with one challenge, the one given thousands of years ago by a man named Isaiah. He said “Lift up your eyes on high And see who has created these stars…”– Isaiah 40:26. As I left that room, the only answer I could give was, “That is my GOD.”